We are lean mean gene-machines

Not survival of the fittest, but of the most selfish genes. How Richard Dawkins stirred up science- and keeps on doing so.
Leestijd 3 minuten — Wo 11 september 2019
Cover to cover

In 1976 when The Selfish Gene by Richard Dawkins was first published, it shook up its readers- and the sense of self they had with it. Neurobiologist Divya Raj was one of those shook-up readers, who at the age of 16 first read The Selfish Gene. She explains the impact of the book- and why it is still relevant today.

Dawkins, as opposed to his predecessor Charles Darwin, argued that the survival of the fittest battle does not take place between species, but rather between genes, using humans and animals as mere vehicles for their survival. “We are survival machines – robot vehicles blindly programmed to preserve the selfish molecules known as genes,” Dawkins writes. It is not circumstance and strength that decides how species evolve, but rather the behavior of genes. Selfish genes, to be precise, because their only goal is to survive, and they will do whatever it takes to do so, Raj explains.

No wonder it caused such a fuzz: with this book, Dawkins crushed the idea of humans as superior beings, rising high above the animal realm. Instead we, just like a toad or a spotted woodpecker, are driven and controlled by genes that want to survive. If Darwin’s evolution theory gave the first blow to our sense of human superiority by positing that humans evolved from animals (and thus were animals), Dawkins handed out the knock-out, equating humans and animals alike to machines controlled by of self-involved genes. “People loved The Selfish Gene and everyone talked about it. However, as with all controversial ideas, the more the people got the idea of the book, the more it became a controversy. This is bound to happen with any provocative idea,” Raj explains.

Dawkins’s The Selfish Gene was read by a widespread audience: his use of simple metaphors to explain complex theories made it accessible and readable for anyone interested in the workings of evolution. However, it was also received with much criticism: we see so many unselfish, or altruistic acts of kindness around us. Acts from which there is nothing to gain and for which nothing is to be expected in return. How about those acts?

True: if we look around us, to our friends and family, most of us will not see selfish egocentric beings. Instead, we see people helping each other, sometimes sacrificing their own enjoyment for the sake of others. However, Raj explains, just because a gene is selfish does not make the human carrying the gene selfish: all genes want to survive, including the ‘nice’ gene or the ‘helping’ gene. An egocentric cyclist does not make the bike egocentric, so to say.

But his theory of selfish genes does not account for all behaviour. Some behaviour or acts are neither altruistic nor selfish but fall under the category of ‘cultural’ or religious. Think building churches, inventing flags. These have little to do with individual behaviour. Dawkins had a specific term for these behavioural traits that are shared and passed on among large groups: memes. Memes, just like genes, are transferred from human to human through the brain. People that live in proximity of each other share the same meme pool, and sometimes a meme goes viral. Christian religion, for Dawkins, would be a viral meme.

For people today the term ‘memes’ means something different, but, as Raj funnily points out, act like Dawkins’s meme: they can go viral, can prevent other memes from becoming popular. His book was not only prophetic about evolutionary theory, but would also be a glimpse into today’s popular culture.

The Selfish Gene showed that evolution theory needs to be regarded on the level of the gene. It also questions our understanding of fairness and selfishness, showing that one does not rule out the other. Human behavior, evolution theory and morality isn’t black and white but, as Raj states, “rather a fashionable grey”. And all of this can be read in cells in a dish. 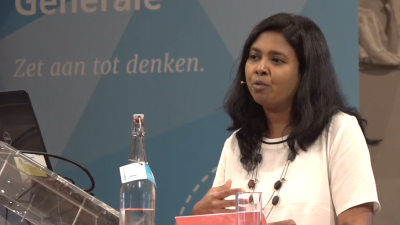