Prof. Nancy Fraser has published myriad books, essays and manifestos on the philosophy and politics of justice, inequality, capitalism and feminism.

Frasier studies social and political theory, feminist theory, democratic theory, critical theory, and contemporary French and German thought. She has theorized capitalism’s relation to democracy, the climate crisis, racial oppression and feminist movements in Fortunes of Feminism: From State-Managed Capitalism to Neoliberal Crisis (2013). A recent public lecture of Fraser on the critique of capitalism can be found on YouTube. Her most recent publication is Feminism for the 99%: A Manifesto (2019), written together with Dr Cinzia Arruzza and Prof. Tithi Bhattacharya.

During the spring of 2021, Nancy Fraser is on sabbatical leave as the Henry and Louise A. Loeb Professor of Philosophy and Politics at the New School for Social Research in New York.

Fraser is splendidly lauded for her work. Among other prizes she is recipient of the Alfred Schultz Prize for social philosophy. She has been awarded honorary doctorates from renowned universities such as Erasmus University Rotterdam and Roskilde University, Denmark. She is a fellow at the American Academy of Arts and Sciences as well as many other places. She has been named a knight of the Legion of Honour of France, the country’s highest honour. 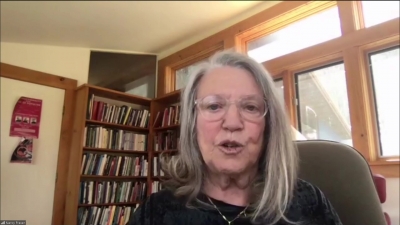 1:35:00
Against the environmentalism of the rich